Lows Peak, on the craggy summit of Mount Kinabalu, is 4,095 metres or 13,435 ft above sea level and is the highest peak in Southeast Asia, the 20th highest mountain in the world and one of the biggest attractions in Borneo.  This is because it’s a UNESCO world heritage site and one of the most accessible peaks.  Lynn and I decided to climb Mount Kinabalu as part of our Borneo adventure – she is a mountain girl and I wanted to take on the challenge.  The path is clearly marked, with steps making the more tricky passages passable. The most popular itinerary is to make the climb and decent over two days, staying overnight at the Laban Rata rest house, which is at 3,270 metres or 10,730 feet.  We booked to ascend to Laban Rata via the longer (8 km) and more scenic Mesilau summit trail, descending via the shorter (6 km), and more popular Timpohon trail. 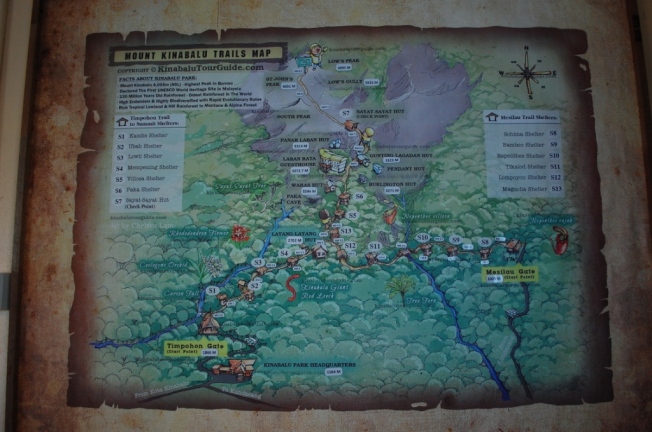 My challenge started before arriving in Kota Kinabalu.  After receiving the kit list from our operators, finding it locally in Thailand was nigh on impossible. Not a great market for woolly hats, warm waterproofs and climbing shoes where I live…. Fortunately Lynn came to the rescue and brought me a care package from the USA.

The morning of our climb, we were picked up from our hotel at Kota Kinabalu at 0630am and ate our packed breakfast en route – two pastries and an apple.  Just over an hour later we arrived at the main park entrance to pick up our passes before proceeding to Mesilau Gate.  We met our guide Nana, rented walking poles, were given a diagram of the trail and resting points and received our brief:

Nana then told us to go, and she would catch up, and so, at 0855 we began our assent. The  weather was perfect for the climb – dry, a little overcast with some occasional sunshine.  Initially the path meandered up and though a very pretty forested area and I passed the one km after 25 minutes. Lynn by now was ahead of me and out of sight – I expected this as she is a lot fitter than me – so I enjoyed the solitude,  the very scenic path and I soon got lost in my own thoughts… 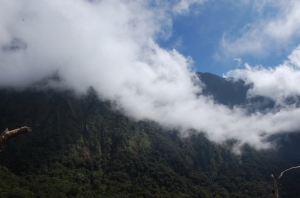 I kept going at a comfortable pace and after another 40 minutes, I had reached the two km mark.

Between two and three km, a few other climbers passed me.  One was a lovely group of Malaysian men from Johor Baru.  Another were from KL on a corporate team building weekend.  All were chatty and encouraged me, observing that I was on my own.  After another 50 minutes, I passed the three km point… 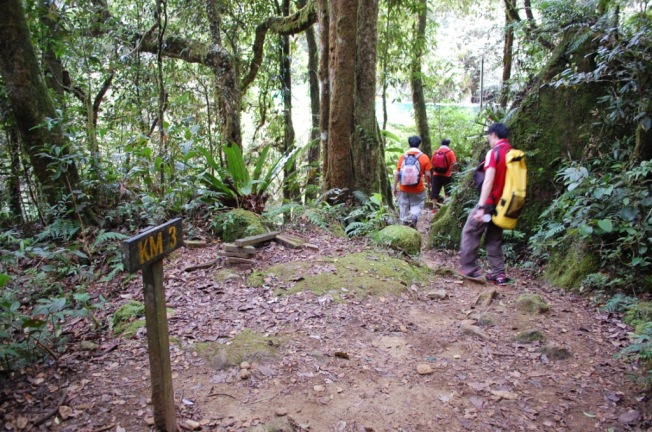 Nana caught up with me soon after this point – with another group. We  chatted for a while – she is a nice woman that has had a tough life. 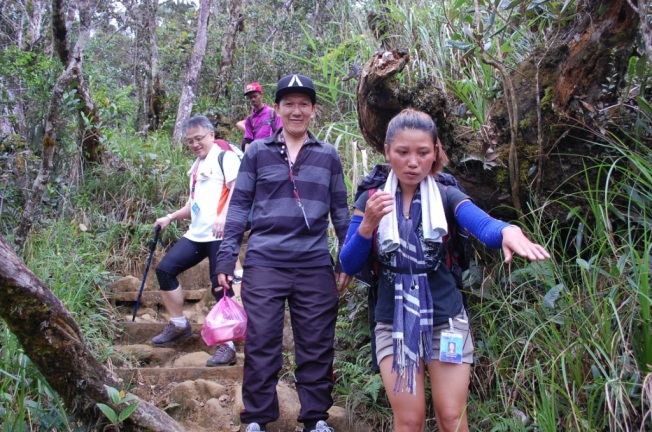 We then stopped at the three km rest station and the others opened up their packs to eat their lunch.  I asked Nana about our lunch, which was part of the package.  She informed me the driver should have provided it – which he hadn’t.  So, I was almost half way up a mountain with another five km and approx 1800m to climb with no food other than nuts I had provided. Overhearing the conversation, the other climbers offered me some of their food, including Nana.  I gratefully accepted a hard-boiled egg and half a cheese sandwich.  It truly was the kindness of strangers.  I had my camel back for water plus electrolytes.  After ten minutes I was on my way again.   The trail continued to meander and I stopped occasionally to take pictures…

More and more steps appeared, and more focus and effort was required to take each one. I developed my own consistent pace by counting “one elephant, two elephants” as I took each step.  This was effective and enabled me to keep going,  giving myself natural targets e.g. numbers or breaks in the steps… 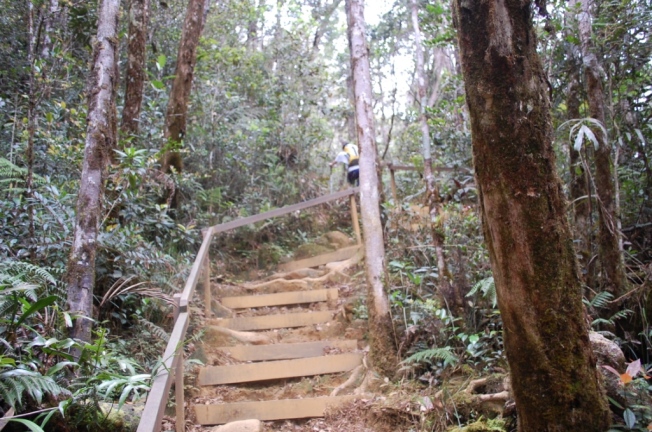 By now, I was starting to realise I would need all my energy and mental focus to get to Laban Rata, so decided to put my camera away.  Soon I reached the cloud line and took a rest at the four km rest hut.  The last km had taken 50 minutes.   At this point I realised this was going to be a solo climb all the way – Nana couldn’t seem to keep up and appeared just as I was leaving …

I passed the five km point after another 45 minutes and continued to the junction.  There I rested with a Malaysian man I had met earlier – he was waiting for his daughter as the next two km’s were the “killer kilometres”.  I was also starting to feel the effects of being at altitude.  After ten minutes or so, I was on my way again and joined the main trail.   The terrain on that last km to Laban Rata was steep but manageable.  I took this on the decent…

By now however my energy levels were rock bottom and I could feel the this air. Nana caught up briefly to ask how I was.  I just said “feeling it now”, and kept going.  The last km took me one hour 15 minutes.  I was so glad to reach Laban Rata – it was 5 pm and the near solo climb took me eight hours.  And as if on cue, Nana caught up with me a few metres before I entered the hut. I quickly looked around for Lynn – she didn’t have a packed lunch either of course. But the over-riding need for FOOD took over and I went for it… 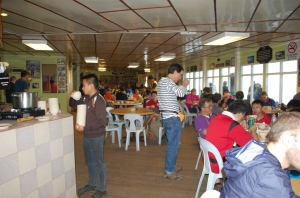 Lynn found me a few minutes later and we exchanged our experiences.  We both felt a huge sense of achievement and were both proud of each other.  We then went out to admire the dusk view – we had been so lucky with the weather! 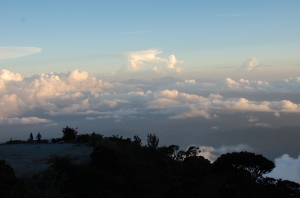 Nana joined us briefly to give us instructions for the morning – to meet at 0200 for the final two km/ 825 metre/2,700 feet assent for sunrise.  After buying water and restocking our snacks, we headed to our dormitory in Gunting Lagadan Hut.  It was basic – a bunk bed with clean sheets, a blanket and a towel   We were both exhausted, yet despite this, I had difficulty sleeping.  I was cold and I felt the high altitude –  but I did manage to snatch some sleep before the alarm went off. We met Nana, who informed us she was sick and introduced us to her brother.  He was guiding another group.  We listened to a very short brief in English, and a longer one in Malaysian.  We were told to “go”, so switched on our headlamps and made our way up more wooden steps – back to counting elephants.

Soon I was surrounded by complete darkness. I waited for my group and Lynn continued with others going at her pace. A line of lights approached and passed me.   More climbers passed yet I still couldn’t see my group.  I was getting cold and felt it wasn’t safe to continue.  I didn’t feel confident about my situation – access to the peak was via a rope guided boulder scramble in complete darkness.  Earlier, Nana described this as “dangerous”.  So I reluctantly decided to end my attempt on the summit, retreating to my dormitory until Lynn returned at around 7am. Following breakfast, we begun our decent at around 8am.

So near, yet so far – I took these summit pictures on the way down… 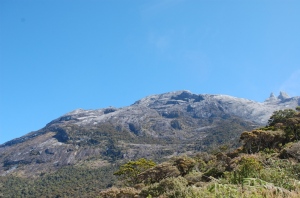 We were one of the first to begin our decent so we met very few people to begin with. After 2 km’s, I was back to being solo, although by now a lot more people were coming up and down, including the porters.  Everything at the hut has to be taken up on the same path and it was quite mind-boggling the loads they had – gas bottles, crates of soft drinks and water, food, trays and trays of eggs!  I have the utmost respect for these guys – it has to be one of the toughest jobs in the world.  No pictures though – the decent is almost as tough as the assent as very hard on the knees and a lot of concentration and balance is required.  I reached Timpohon gate just after 1pm.  Lynn had arrived less than an hour before and was patiently waiting with an energy drink.

Before heading back to Kota Kinabalu, we had another very welcome lunch before collecting our certificates.

Climbing Mount Kinabalu was a great privilege.  I don’t mind admitting I never thought I would ever contemplated such a feat, but Mount Kinabalu was irresistible, as it can be attempted by non-climbers such as myself. However, IT IS TOUGH and anyone considering or attempting the climb must have a clean bill of health and fitness with strong joints, good  muscle tone and should exercise everyday.  Training for the climb will definitely be advantageous – I passed some climbers half my age that were struggling.  As much as I enjoyed the nature and scenery, the climb and all the challenges it presented, I was very disappointed not have made the summit.  There is no doubt if I had been with a guide, I would have attempted it, but without a guide I was denied the opportunity – I wasn’t heading for those ropes on my own in the darkness.  All climbers sign a disclaimer, so the final risk assessment and responsibility was down to me.

Don’t let this put you off though.  Clearly Lynn and I were a little unlucky.  If climbing Mount Kinabalu appeals, I would recommend it.  Although hard work, there is a great sense of achievement.  I would do it again – but with a different operator. When you break through the cloud base, the  views alone are worth it…. 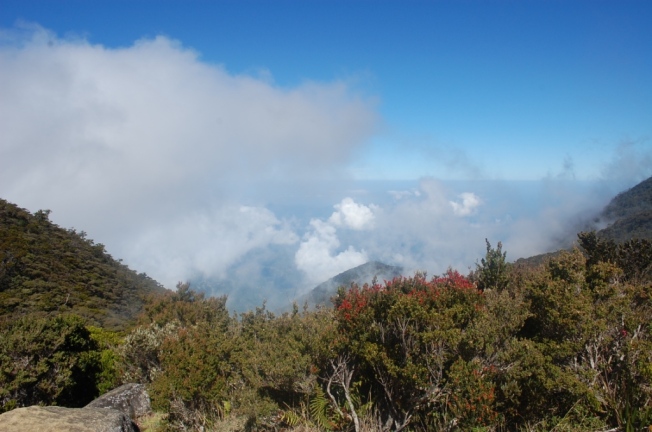 Getting to Mount Kinabalu

By Air – Kota Kinabalu International Airport (BKI) has two terminals and  is the nearest airport to the Mount Kninabalu park.   Refer to the airport wikipedia page for a list of airlines.  Services from KL, Manila, Singapore, Hong Kong, Seoul and Shanghai, plus others.  All Mount Kinabalu tour operators pick up from the Kota Kinabalu area.  It is a one hour 15 minute drive to the park entrance.

Permits, guides and where to stay at Laban Rata

The vast majority of climbers book though agents and tour operators who put together a package that includes these three key components;  permits, guides and food/accommodation for the climb.  The main operator is Amazing Borneo –  supported by the Malaysia Tourism Board.  On the mountain, their guides were easily identifiable from their lanyard and were always with their groups.  There are other tour operators – unfortunately ours was not the best, although our booking agent was fantastic.  The most popular option is to climb over two days, staying overnight at Laban Rata.  Full details can be found on the Mount Kinabalu website.

Booking independently is also possible – more details can be found on wikitravel.

Book well in advance as permits are limited.  Currently this is advertised online at 146 permits per day. We booked late and found availability though a smaller and less well-known operator.

The night before the climb, we stayed at the Horizon Hotel in Kota Kinabalu.   I would recommend staying closer to the park entrance prior to the climb to allow for altitude adjustment and to enable an earlier climb start. There are a number of hotels in the area close to the park entrance – all the booking websites list them.