When living in an Islamic country you can truly appreciate Mosques, their abundance and accessibility to worshippers.  Even when you can’t see them, you can hear them as the call to prayer is made five time a day.  The first is the Fajar, which is called between dawn and sunrise, so alarm clocks are generally not needed in the Middle East!

The  proximity of Mosques is also noticeable. I remember in Abu Dhabi a Mosque was found every kilometre, so no one would have more than a 500m walk to pray.  It appears to be similar in Muscat, as Mosques are very much part of the landscape.  What makes them even more noticeable is the diversity of style and age, reflecting a city that is both steeped in a diverse cultural heritage, yet is expanding fast thanks to the oil fuelled developing economy.

Whilst living in Muscat I have driven past some lovely Mosques, large and small.  Many reading my blog live in the Middle East, so this might not be so interesting to them now.  I do think it is important however, to acknowledge what helps to identify and remember a city or location you have visited or lived in.  For me, the Mosques of Muscat beautifully reflect its identity – they are a rich part of its architectural heritage and faith.

I have kept my list of favourite Mosques in Muscat to just five so it isnt’ the worlds longest blog post.  So, in no particular order of preference, here they are:

This very enchanting little Mosque is about 1 kilometre from the entrance gates inside Old Muscat . What is eye catching and memorable about this Mosque is the lovely dome and minaret tiling – ornate but not overdone.  Set against the mountain with an old Omani coastal fort on top, this Mosque very much shouts “Muscat”.  Unfortunately because I cant read Arabic, I wasn’t able to read its name. This Mosque is typical of neighbourhood Mosques – on the roadside and there were others a short walk away.  For me however, the picturesque location of this cute little Mosque earned its place in my top five.

Said Bin Taimur Mosque in Al Khuwair is another of my favourites.  It really does look stunning with the mountain backdrop.  The first view is what most people driving around Muscat will be familiar with  just as you approach the roundabout. This Turkish style Mosque very much reminds me of the famous Mosques in the  Sultanahmet area of Istanbul. The Sultan of Oman, His Majesty Qaboos bin Said Al Said built and named this after his father, whose leadership and seat he challenged 1970, exiling his father to London.  The Mosque is widely regarded as a sign of reconciliation between the two. 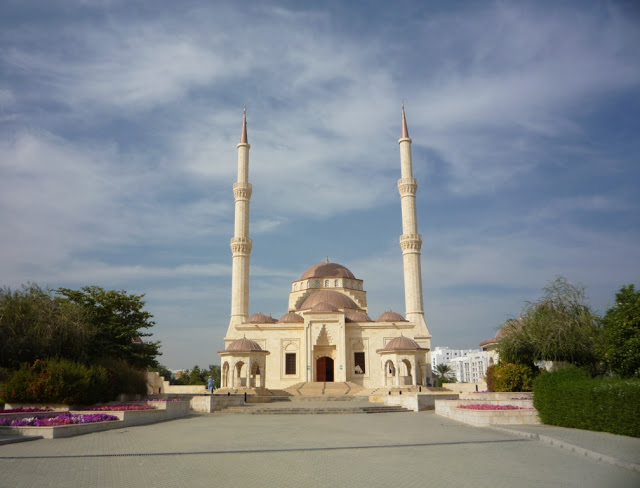 Al Wattayah Mosque is one of the most distinctive and prominent  Mosques in Muscat, sitting right by the highway.  I love it because if its totally unique and funky design.  It takes a lot of courage to put a contemporary twist with something so traditional and functional as a place of worship, but this has been pulled off beautifully with the Al Wattayah Mosque with its very modern minaret design. The green and gold orbs at the top of the minaret look fantastic I think.  I tried to find out more about this Mosque – the architect and when it was built, but to no avail.  Anyone reading this who may know, please do share in the comment box.  Thanks. 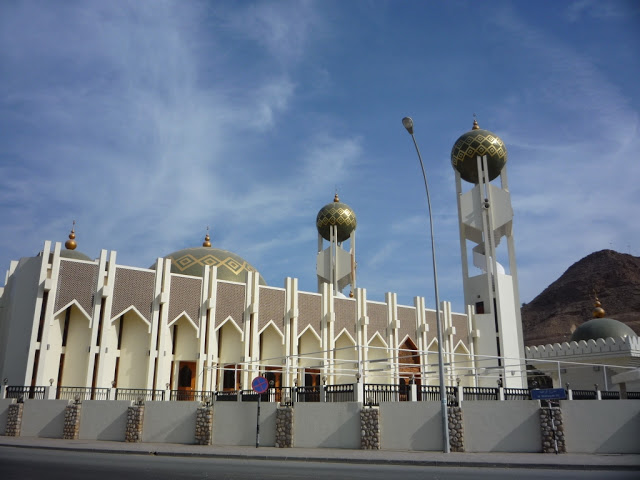 Al Lawatiya Mosque on Muttrah Corniche is one of the oldest and most well known of Muscat’s Mosques. It is also known as Al Rasul Al Aadam Mosque, and has prompted the most research for this blog post.  I realised from the architecture this Mosque has a Persian influence and on further investigation, I discovered it was built around 300 years ago when the Arab Lawati tribe arrived and settled in Oman. The port location of Muttrah, Muscat was the obvious choice it seemed, as the Lawati are known for being successful traders. Lawati Arabs it seems are also very well travelled and have previously lived in parts of Persia and India.  Today, Lawatis live around the Gulf Region, with the largest community in Muscat – and don’t they have a gorgeous minaret to call them to prayer too!

This is the only Mosque I have seen with a clock! Most unusual, and definitely a touch of Big Ben about it (must be the British influence!).  This Mosque is right by the  Madinat Sultan Qaboos slip road back on to the highway (Ruwi direction).  What makes this Mosque extra special is wonderfully adorned in gold and blue tiles with the distinctly Omani fort and castle crenellations.  Definitely unique and lovely to look at, as long as traffic around you isn’t too crazy.

The Sultan Qaboos Grand Mosque in Bausher, Muscat is Oman’s national Mosque and one of Muscat’s modern landmarks.  The only reason it hasn’t made the top five is because it generally gets all the attention and is already well publicised in tourist guides.

With the discovery of oil in the region, several Arab countries have invested in some amazing new Mosques that are modern national treasures.  Using the best craftsmen and building materials then decorating with ornate and beautifully made chandeliers and carpets, the results are outstanding.  I have visited a couple of other Mosques in the region falling under this category and I have to admit, the Grand Mosque is the most tasteful of them all.  Completed in 2001, the Grand Mosque is currently the third largest Mosque in the world, has the second largest single woven carpet in the world and can accommodate up to 20,000 worshippers.   A wonderful legacy to have built for future generations to enjoy.

Photo credit:  Jayavarman VII  (He has some really great images on Panoramio account)